How I Learned English without Leaving Brazil 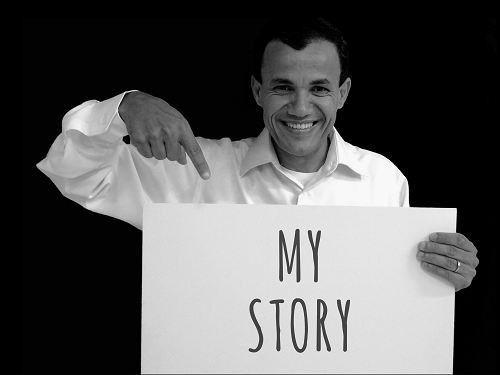 Have you ever laughed without getting the joke? Me too. Now imagine doing it for four hours in a group with 33 people, listening to a language you don't understand!

That was exactly how I felt during Halloween in 1991. I was 22, serving on a mission in Pernambuco, Brazil.

My parents are from Brazil too. With my father I learned to be talkative, as we used to sell barbecue on open markets in my native city. When he passed away, my mom was very young and had to work really hard to raise three little kids. After a long and busy day, she found time to read. With her, I learned to love reading too.

When I started on the mission, learning English was not one of my priorities. After seven months, I was called to serve on the staff. I was in charge of keeping records, delivering the missionaries' mail and my real challenge was to welcome the newly arrived foreigners.

When missionaries came in speaking zero Portuguese, I had to 'make do' to understand them. Once, I got a phone call from a mother who wanted to know if her son had received a package. She talked in a speed as if she was talking to a native speaker. The only word I understood was 'pick up'. For me, that was a kind of truck. I thought: "She has just sent a giant package and wants us to take it home with a pickup truck, or she sent him a pickup truck!?"

But none of that compares to what happened that Halloween. In fact, we were celebrate Thanksgiving Day with a dinner at mission president's house. His wife had cooked lots of American dishes. Ten of the missionaries were newcomers. Twenty-one were bilingual and I ...

Had never tried to laugh that long before! =)

After the 14,400 longest seconds I'd ever seen, we returned home. My companion, noticing my embarrassment, asked me the golden question: "Do you want my help to learn English?"

Next morning we woke up an hour earlier. We read aloud the Book of Mormon in English. On his turn, I was checking my copy in Portuguese whenever I heard a new word. On my turn, I did my best, reading with my strong accent and moving on.

Three months later, he got transferred. He took his few belongings, but his influence opened up a world of Opportunities for me!

After the mission, I kept studying English, and had amazing experiences:

I worked at the Pan-American Games Rio 2007, participated in the Steam Generators Replacement Project in Angra 1 and created a Web site for Portuguese learners in 2006. (People from 180 countries visit it every month.) I wrote some books, created another website for English learners and took an online course from Brigham Young University Idaho.

Theser are some reasons why I am grateful every day. More than 20 years later, I can finally laugh at the right time!

PS: I'm about to release a FREE COURSE IN VIDEO for those who want to learn Portuguese on their own. Keep an eye on it, by inserting your e-mail below: